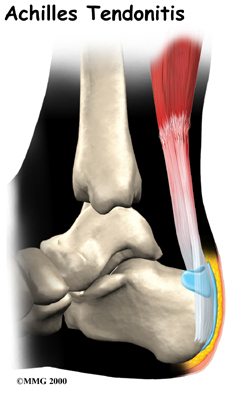 We use the term tendonitis, which means inflammation of the tendon, to refer to these chronic tendon problems. Doctors now know that the tendon does not always become inflamed when it is injured. Other changes in the tendon can cause tendon pain. However, tendonitis is still the most commonly used term.

This guide will help you understand:

Where does tendonitis develop?

Tendons connect muscle to bone. A tendon is made of material called collagen. Collagen is a key building block of the body. Collagen is considered a connective tissue because it forms tough strands that are like the strands of a nylon rope. Like the strands in a rope, the strands of collagen line up. The more strands, and the better they line up, the stronger they are. The tendon is wrapped in a thin, slippery covering called the tendon sheath. The tendon sheath allows the tendon to slide easily against the tissues around it.

Tendon injuries can show up anywhere in your body. Doctors see tendonitis most often in certain sites. 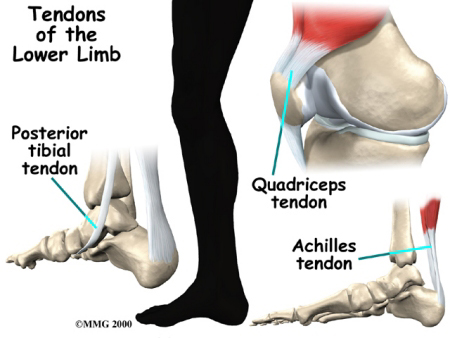 The tendon sheath, the tissues of the tendon, and the attachment to the bone can all become injured in the: 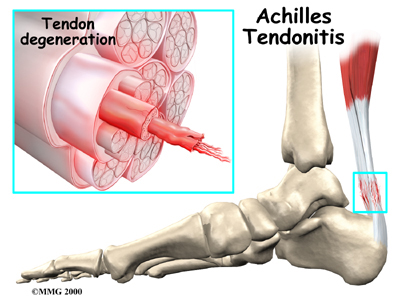 found in the lower leg. Damaged Achilles tendons carry a higher risk of rupturing because of the weight they bear while standing and walking.

Tendonitis along the inside edge of the ankle and into the instep of the foot is called: 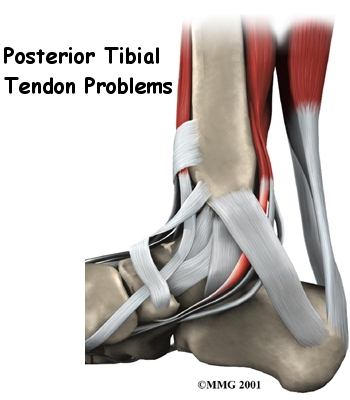 It is usually caused by age-related degeneration. If this tendon breaks, it can cause the arch of the foot to become flat and painful.

Tendons of the Knee 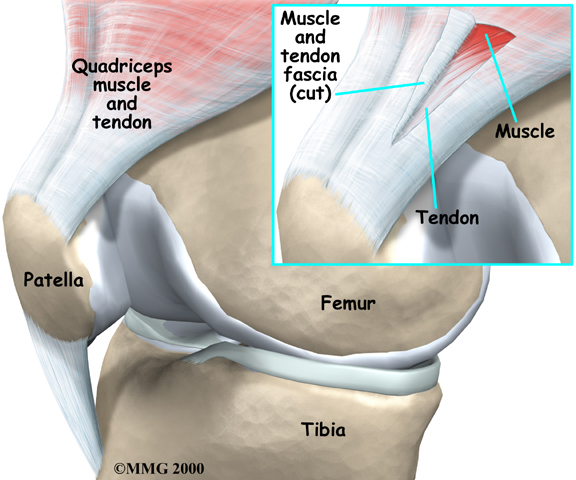 Tendon problems are common in the hand and wrist. De Quervain's disease causes pain in the wrist just above the thumb. 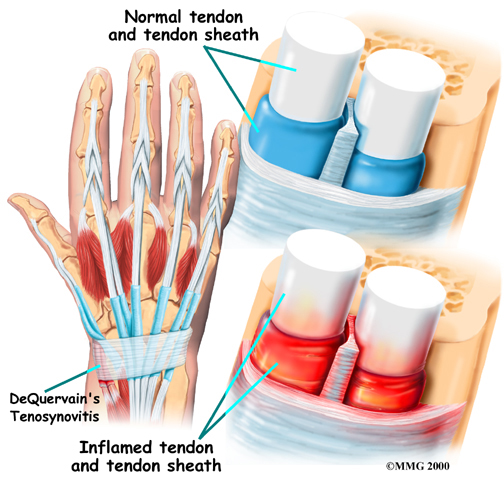 Trigger finger generally causes pain in the palm just below the knuckles, but it eventually causes problems with movement. 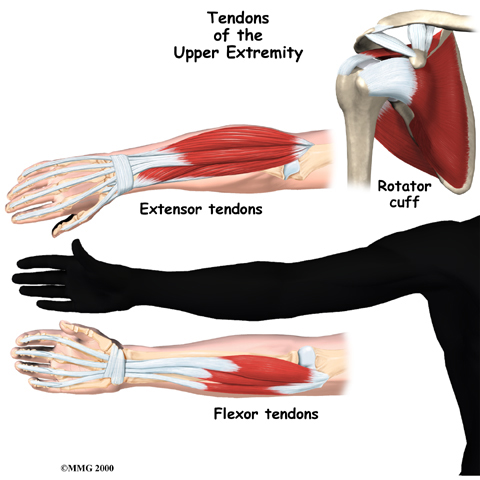 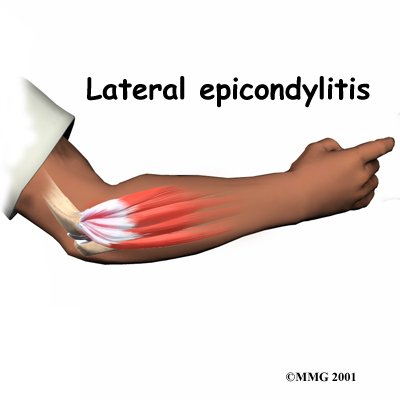 affects the area where the tendons of the elbow attach to bone on the outside of the elbow. It causes pain when using the wrist and hand. 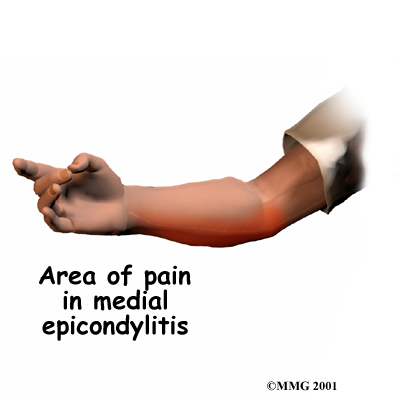 affects the area where the tendons of the elbow attach to bone on the inside of the elbow. It causes pain when using the wrist and hand.

Rotator cuff problems of the shoulder range from mild damage to: 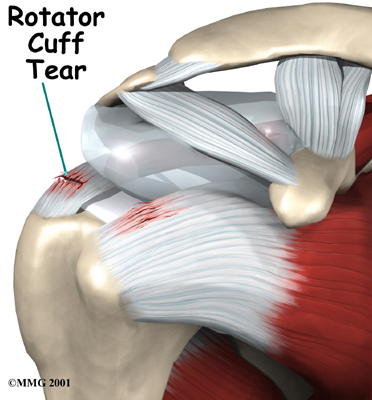 They can cause pain even when resting.

Often, the muscles or other tissues of the joints become tight, misaligned, or weak around the area of tendon injury. Some of the pain and swelling of tendonitis may actually be in the surrounding tissues.

Why do I have this problem?

Doctors don't know exactly what causes most tendon problems. They think that repetitive stress on the tendon is the most common cause. The tendon can be injured by the repetitive pounding of running and jumping, or by the stress caused by lifting heavy loads over and over again. Tendonitis usually builds up over weeks or months.

If the tendon is too damaged, or if it doesn't get time to heal, the problem becomes chronic (long-lasting). In general, the heavier the load or the more often the stress is repeated, the more likely you are to develop tendonitis.

Too much stress on the tendons can be made worse by other factors. Lack of flexibility or weakness in your muscles can make tendonitis more likely. Shoes that don't fit right, poor equipment, or incorrect technique can also increase your risk of tendon injury. Don't underestimate the benefit of upgrading your equipment. The improved design of athletic shoes over the past few decades seems to have decreased tendon injuries.

Aging seems to cause tendon damage in some cases. As we age, the tissues of the tendon can break down, or degenerate. Age-related tendon problems do not seem to cause inflammation. The tendon material itself is more affected in these conditions and some surgeon's refer to this type of tendon problem as tendonosis. 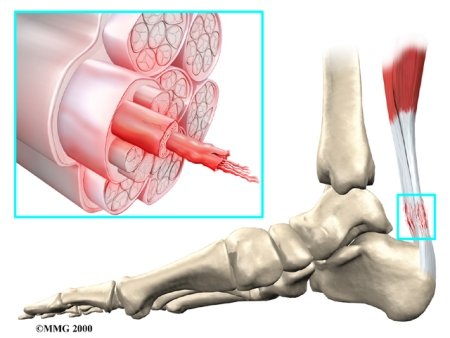 Many factors can work together to cause tendonitis. For instance, a woman in her forties who takes up running may have tendonitis caused jointly by the degeneration of aging and the mechanical stress of running.

Tendonitis causes pain. This is the primary symptom of tendonitis and tendonosis. The affected tendons are sometimes swollen. In some cases this swelling occurs from actual thickening of the tendon itself. In other cases the swelling comes from thickening or swelling of the tendon sheath. Tendon problems often cause pain after resting, such as when you first get up in the morning. This pain usually goes away within minutes, or even seconds.

The pain or swelling in your tendon may make your joint hard to move. Some types of tendon problems cause crepitus, a crackling feeling when the joint moves. In rare instances the weakened tendon may actually rupture, or break, with a sudden force. This may require surgery to repair.

When you visit Innova Physio & Sports Rehab, our physiotherapist will take a detailed medical history, including many questions about your activities, your job, and your symptoms. We will also physically examine the sore area. The probing and movement may cause pain, but it is important for us to know exactly where it hurts.

Some patients may be referred to a doctor for further diagnosis. Once your diagnostic examination is complete, the physiotherapists at Innova Physio & Sports Rehab have treatment options that will help speed your recovery, so that you can more quickly return to your active lifestyle.

What can be done for the problem?

Tendon problems can be difficult to treat effectively. They can last for many months to several years, even with treatment. Although the amount of time needed for recovery varies, you should expect your treatment to take from six to nine months. Even if treatment is effective, your pain may come back. The exact treatment your physiotherapist at Innova Physio & Sports Rehab recommends depends on which tendon is affected.

If there are signs of true inflammation, our physiotherapist will probably suggest that you use nonsteroidal anti-inflammatory drugs (NSAIDs), such as aspirin and ibuprofen, to help control the inflammation and pain. NSAIDs are usually used for a short time with tendon problems. We may also suggest ice or heat treatments.

You will need to rest and give your body time to heal. If playing tennis injured your tendon, stop playing tennis until it is completely healed. You should only take part in activities that don't strain the injured tendon.

When you begin your Innova Physio & Sports Rehab rehabilitation program, our physiotherapist will teach you stretches and exercises to help your tendon heal and regain its strength. We can also assess your work site and athletic equipment and recommend changes to reduce the strain on your tendon. Depending on your type of injury, we may ask you to try such special equipment as arch supports, heel lifts, and splints.